Weather update: snowfall in the mountains, the possibility of rain in the plains. 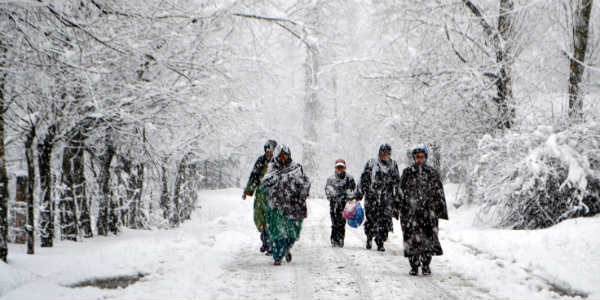 There is snowfall in the hill areas due to which there will be rain in the plains in the next one or two days, due to which the cold is likely to increase. According to the Meteorological Department, there are chances of rain in the next two days in many states including Delhi, Rajasthan and Madhya Pradesh. In Rajasthan, the temperature will decrease by 4 degrees after 15 December. At the same time, fog continues to wreak havoc in UP and Bihar and rain is also expected on 15-16 December.

The cold will increase in Delhi from December 14

Light rain is expected in many areas of Delhi and Uttar Pradesh. After this, there will be fog from December 13. On December 13, light to moderate fog will occur, while on December 14 and 15, thick fog may occur. From December 14, cold winds will start coming in Delhi, due to this, the minimum temperature will also start to decrease.

Leh temperature rolled down to minus ten degrees

Jammu and Kashmir have cloudy weather. There is a possibility of a dense cloud by evening and there is also a possibility of rain and light snowfall in some places. The weather is clear in Jammu and Kashmir at present but due to repair works, the Jammu-Srinagar National Highway is closed today. There was a light rainfall at night in areas like Srinagar, Qazigund, Pahalgam, Kukarnag, Bhadarwah, etc. Pahalgam and Gulmarg’s night temperatures were below zero. Leh night was the coldest night. The minimum temperature dropped to -10.0 ° C.

Snowfall in Uttarakhand on high peaks including Kedarnath and Badrinath

The weather changed in Uttarakhand. Today, the high peaks including Kedarnath and Badrinath received snowfall. At the same time, the meteorological department has also issued a yellow alert about this. Apart from this, celestial lightning can also fall in some places. The last week of November saw good snowfall in the state. The maximum and minimum temperatures are between three to five degrees Celsius. Bikram Singh, director of the State Meteorological Center, said that western disturbances could be active in the state from Friday. In such a situation, rain and snowfall are possible along with hail.

Rain will occur in Bihar on 15-16 December, a cold will increase

There will be no relief from a fog in Bihar. By 10 am, thick fog will occur in most districts. Light rain is expected on December 15-16. After that, the sky will be clear and the night temperature will decrease and the cold will increase.

10 days of December have passed, but the day and night temperatures in Rajasthan are not decreasing. Meteorologists had claimed that due to the effect of La-Nina, there will be a severe cold this time. Now the anticyclone system is preventing the cold winds from the north from moving, due to which the Western Disturbances are not able to fully activate and the state is not yet cold.

Cold wave will occur in Punjab after rain

Due to snowfall in the mountains regions, many districts of Punjab are likely to get rain in the next two days. According to the weather department, Pathankot, Gurdaspur, Amritsar, Hoshiarpur and Nawanshahr may receive rain, mist and cold waves on December 13 and 14. According to the Meteorological Department, the minimum temperature in Punjab is hovering above 5 degrees.

In the next two days, light rain may occur in many areas of Haryana. After this, there will be a rapid rise of cold from the mountains regions to plains regions. On 13 and 14 December, a deep mist may envelop many areas, while a harsh winter may begin after 17 December.

The post Weather update: snowfall in the mountains, the possibility of rain in the plains. appeared first on Headlines of Today.

US Vice-President Mike Pence told lawmakers on Wednesday that he would not flout his constitutional obligations and reject Electoral College...

After 35 rounds of negotiations, Beijing and Brussels announced the completion of the China-European Union Comprehensive Agreement on Investment negotiations...