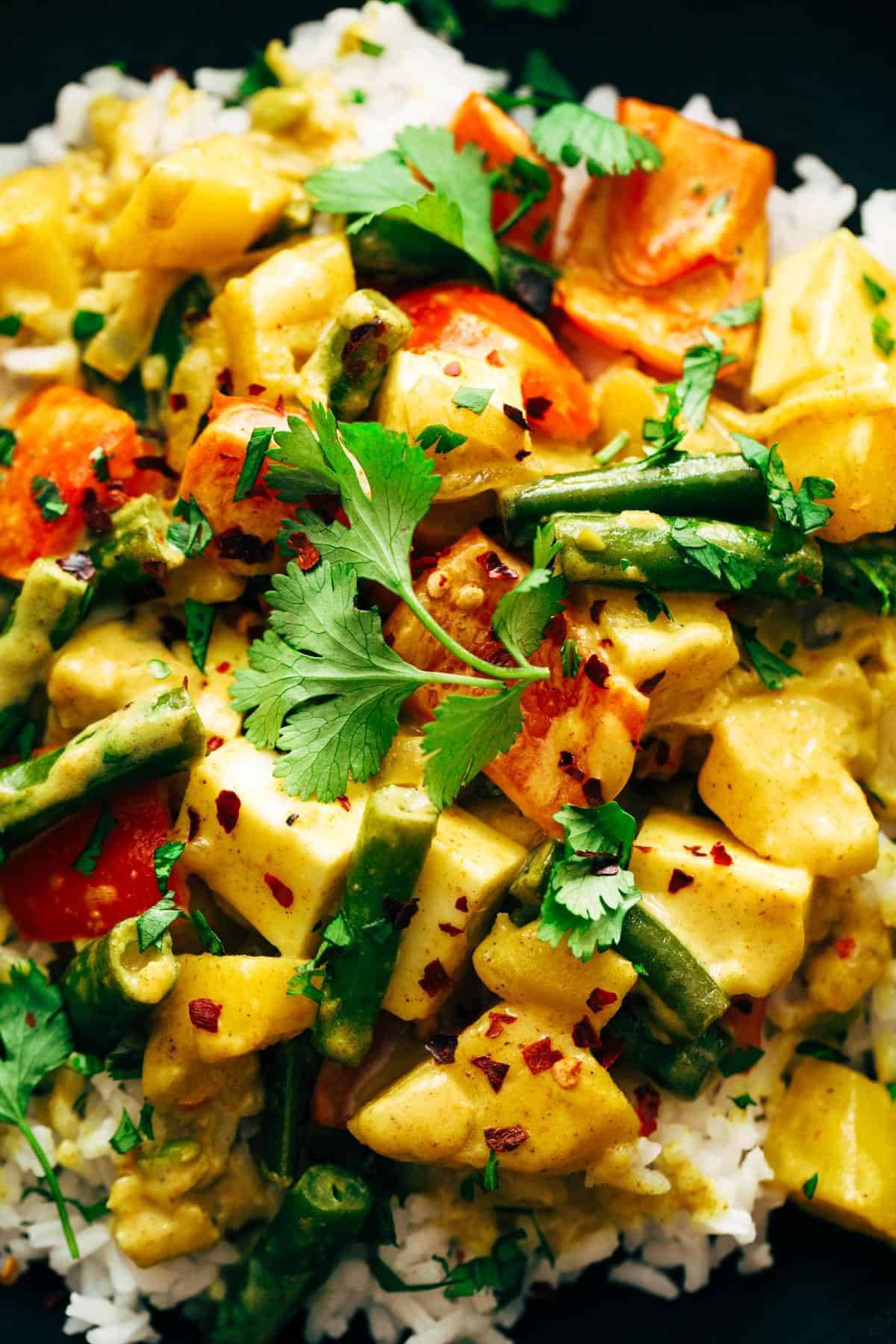 Let the record show: if I could eat this creamy, cozy, veggie korma for every cold-weather meal, I’d be a very happy person.

(Which, honestly, is kind of what I’ve been doing lately. A little here for lunch, a little there for dinner, a little the next day with some added paneer because I love myself…)

It’s important to know that this recipe has so much flavor, but it’s also not LOUD flavor. It’s like rich, cozy, mellow, could-keep-eating-forever flavor. The base of this veggie korma is a boatload of comforting vegetables like fork-tender potatoes, bell peppers, and green beans, but the thing that makes it feel like a hug is that creamy golden sauce. We’re giving a gentle sauté to a careful amount of aromatic onion, garlic, ginger, cardamom, coriander, and other spices, and then adding a bit of cream and yogurt to make this the kind of recipe that lands in the perfect exciting-but-gentle flavor zone.

Scooped up hot over a pile of steamy basmati rice… oof. Game over. We can survive winter with this. It’s the kind of big-flavor-cozy recipe where you can practically finish the entire pan in one sitting. Watch How to Make This Recipe

I based this recipe off the Vegetable Korma recipe from a 2008 cookbook called Best Ever Indian Cookbook by Mridula Baljekar, which is just a gem of a book. It has always been one of my favorite sources for Indian recipes because of the step by step photos, and every recipe I’ve tried over the years has been awesome (and there have been many). The changes I made from the original include subbing some ground spices in place of whole spices and adjusting the veggie-to-liquid ratios a bit. For a more in-depth look at Indian food including influences, methods, definitions, and more, check out this amazing post called Indian Cooking 101 by our friend Anu from Simmer to Slimmer! The equipment section above contains affiliate links to products we use and love!

Spice Substitutions: The cookbook I studied up on recommended using whole spices when possible – for example, cinnamon sticks and dried red chile peppers, as this is the traditional way to build the flavor base in a lot of Indian cooking. I often don’t have cinnamon sticks or whole dried red chile peppers on hand, so I’m just sharing what I use instead which is ground cinnamon and red pepper flakes. But if you have the whole spices, go ahead and use them!

Did you make this recipe?

There’s nothing quite like a soft, tender cinnamon roll filled with gooey cinnamon sugar and topped with cream cheese frosting....

These brown sugar snickerdoodle cookies are crackled with cinnamon-sugar on the outside and chewy-soft on the inside. This recipe does...

Save prep time by serving dinner family style. Everyone grab a fork and dig into Cheeseburger Hamburger Pasta Skillet, Leftover...

If there's one thing that we can all agree on, it's that these roasted smashed potatoes are absolutely delicious! The...

Celebrating the Holidays, the Gullah Way

My favorite childhood holiday memories are filled with large gatherings, laughter, and many, many overlapping voices. This holiday season, to...

Homemade hot chocolate is a dreamy treat on a cold day. Make it with real chocolate, whole milk, and vanilla,...

The best Bluetooth trackers for 2020